Last week was not been a good time to be a Braves fan. In one fell swoop, former general manager John Coppolella was banned for life from Major League Baseball and the team was punished harshly for trying to circumvent international free agent spending caps. In addition, special assistant Gordon Blakeley received a one year suspension.

The penalties basically prevent the Braves from signing any kind of major talent in the IFA market for the next four years. And if that’s not bad enough, 12 current prospects — including No. 38 overall prospect, shortstop Kevin Maitan — were declared free agents and another was prevented from consummating an agreed-upon deal. Those players are free to sign with new teams beginning next Tuesday, December 5, at 8 a.m. CT. They will get to keep their original bonus, but they only have until January 15, 2018 to negotiate deals with new teams.

Talking Chop has more information on the penalties, along with a full list of players to whom MLB has granted free agency and their original signing bonuses: 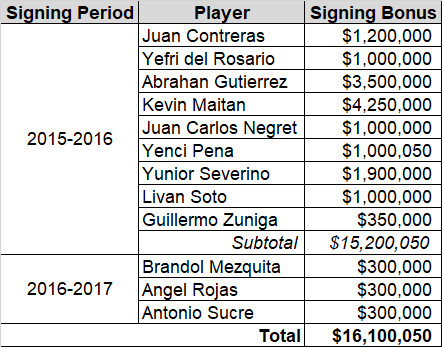 The Braves also lost their ability to sign Robert Paulsen [insert obligatory Fight Club reference] in the 2019-20 period and had their potential deal with shortstop Ji-Hwan Bae voided.

The Cubs can go after and sign any of the players with a couple stipulations: 1) The max contract they can offer this year is $300,000, with only $100,000 of that counting against this year’s pool; 2) If they choose, the Cubs can sign any player and apply it to their 2018-19 pool as long as it fits within the initial $4.75 million allotment.

So that brings up a few big questions:

Can the Cubs afford to go after Kevin Maitan?

Why yes, yes they can. Whether they use all of next year’s pool to land  is another story. Maitan got $4.25 million as the recipient of the Braves’ highest bonus in the 2016 class, so he’s not going to come cheap. At the same time, it’s unlikely that he’ll command more than than that this time around.

Does that mean the Cubs will pursue him?

That could depend on how the Shohei Ohtani negotiations turn out. If the Cubs think they can get a better player in the summer of 2018 for a lesser price, they may do that. Maitan was a bit underwhelming with the Braves’ Gulf Coast Rookie League team in 2017, hitting only .246 and appearing to have regressed from his 16-year-old self. However, he is said to be in much better shape this fall than he was during the regular season.

Then again, Ohtani’s cost is nominal in comparison and his $300,000 bonus applies only to this year’s capped pool and would not necessarily preclude the Cubs from going after a big-time prospect whose bonus would apply to next year’s pool. And since he’ll only be turning 18 in February, Maitan’s timeline is significantly different from Ohtani’s.

Could the Cubs have interest in any other former Braves prospects?

While Maitan is considered the crown jewel of this mini-class, there are four other players the Cubs might be interested in. Severino hit .286 with the Braves Gulf Coast team; Contreras has a live arm with mid-90’s heat but struggles with his command; Ji-Hwan Bae might have the most upside as he has been compared the Nationals’ Trea Turner but has yet to play in the states; Gutierrez is a respected defender whose bat could quickly match his defense.

If the Cubs do go shopping, the odds of signing a position player will be tough. Because it is rare for a young pitcher to have quality pitches, command, and control at 17 years of age, they should generally command smaller bonuses and be easy to sign. I am sure the Cubs will do their due diligence on every prospect.

It is important to remember that these are just young kids who only have about 40-50 games of experience at the pro level, to say nothing for their limited life experience. It has to be hard enough for them just to leave their respective home countries as teenagers, now they’ll be going to new teams and different baseball cultures. Even a nice bonus check doesn’t make everything easy.

Regardless of where they end up, let’s hope these young men find the best spots for them both personally and professionally.