The panels at Cubs convention are focused primarily on current and former players, with prospects reserved for the auxiliary stages. That doesn’t necessarily mean there isn’t much information about what’s going on in the minors, only that you have to be a little more intentional about finding it. Sticking around for the Down on the Farm panel that concludes the convention helps in that regard.

Heading into the weekend, I was curious about several different topics related to individual players and details on how the Cubs are changing their development process. Specifically, I wanted to know whether Marquee would be covering the draft and broadcasting games from minor league affiliates; how new hitting and pitching directors Justin Stone and Craig Breslow were changing the team’s processes; and whether they’d reveal any prospect assignments for 2020

I also wanted to know how Dan Kantrovitz (VP of scouting) and Bobby Basham (director of player development) would be approaching their roles as part of this new wave of personnel and philosophy. Not all of my questions were answered, but there was still plenty to take away from the annual event.

When the Cubs first announced their own network, I wondered whether it would have a daily minors recap show or anything related to the system. On Saturday, Marquee GM Mike McCarthy announced that the network would be showing some MiLB games in an abbreviated format. A specific recap show was not announced, but the full-season affiliates produced segments for Sunday’s “Lead Off Man” on WGN and I expect something similar to continue. There was also no discussion of how the network would covering the draft. 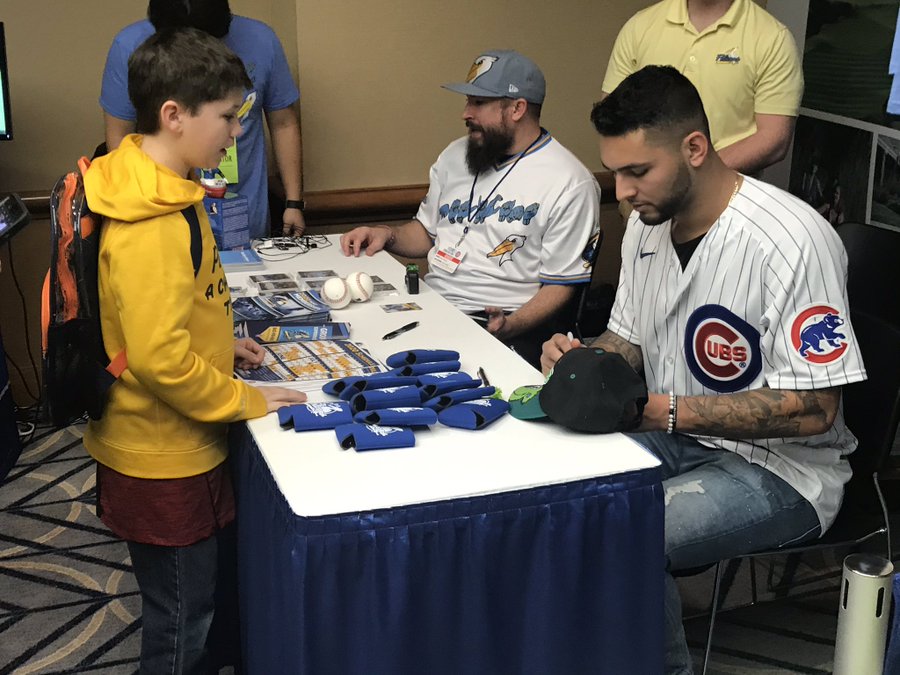 My favorite discussion was with Alzolay, who just ran with each question and really lit up when talking about the game and his other passions. You can catch all the interviews over at CI’s YouTube channel, just be warned that the audio isn’t spectacular. The Pelicans should also have clips up on their Facebook page.

Sunday’s final session is the only one dedicated solely to the system, so it always provides a wealth of information. Unlike recent years, Jason McLeod and Jaron Madison were not part of the panel, nor were there any prospects at the table. Instead, Basham and senior director of player development Matt Dorey provided all the answers.

Here are some highlights from the hour-long information download:

We didn’t get to hear much on projected assignments for most of the top players in the system, though that’s not entirely unexpected. It was a little surprising that neither Stone nor Breslow were there to take questions in any major session. It would have been cool to hear more about the technology and philosophy they’re implementing, especially when the former has been touted by ownership as a key to future success.

Rest assured that there will be plenty going on behind the scenes, though Marquee carrying more of the games means we’ll all get to see more than ever as well. Whether it’s the top prospects or some less-heralded players on whom you might want to buy low, the system is healthier than it’s been in years.

I have been covering the minors for Cubs Insider since 2015, but the system kind of bottomed out in 2017 after a couple of really fun years. After a slow burn over the last two seasons, it’s looking like 2020 could again bring the buzz back for fans and those who cover the minors. Greg Huss, Jimmy Nelligan, and I will be all over the happenings as many of the aforementioned prospects could be on their way to Chicago before long.